Who needs friends when you have an Arduino?

Like every person, I have a burning desire to know who’s in my house when I’m not. A few months ago, I decided that I had had enough of the uncertainty of my extradomicilial activities, and that I needed to do something about it. I realized that I had two options. The first option would be to hire someone to be in my house 24/7, but that would get a bit embarrassing when I wanted to watch reruns of Desperate Housewives. The other option would be a motion sensor that texts me when it detects motion.

Luckily, this proved really easy to do with an Arduino. All I needed to get was the Arduino itself, and a PIR motion sensor, plus my home server. The motion sensor uses infrared to detect whether someone is moving, and outputs high or low accordingly, which the Arduino passes to the server via USB, and the server texts me using Twilio. Let me show you how the setup works. 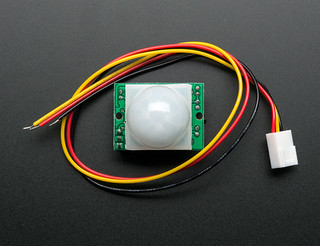 This $3 baby can sense motion!

The thingy in the photo on the right is the sensor. It costs $3 or so, and it’s a thing of beauty. You simply connect it to the Arduino, and it outputs HIGH when it detects motion, and LOW otherwise. In itself, that isn’t very useful, but the Arduino can do much more with it.

To make the motion sensor more useful, I decided to have the Arduino output “seconds since last motion” every second. This means that there’s a counter that counts up every second there’s no motion, and it resets when the sensor sees something moving, like my body. The code for this is pretty straightforward, it just resets the counter whenever there’s motion and outputs the value every second on the serial (USB, really) port:

This whole thing is pretty much two useful lines, one to reset and one to output. The rest is just C.

Do note that millis() wraps around to 0 at some point (after about 50 days, I think?), which may trigger some odd behaviour, but just make sure to get out of the house once every two months or so and you should be fine.

Doing something with it

The “something” is that it will set an away variable to True if it detects no motion for more than five minutes, and, if the counter suddenly resets when away is True, it means there’s someone home, so the server should text/email/otherwise notify me. Here’s the code (it requires pyserial):

The send_message function is just what notifies me, and it’s rather outside the scope of this post. You can use the Twilio Python library, or send an email, or a push notification, or hook it up to a wet blanket so it can send smoke signals, whatever is your preference.

I’d write some more stuff here, but this is a pretty simple setup, so I ran out of things to write. I could tell you about how I hooked this up to the house lights so it can turn them on and off when I’m in or out, but that will probably be the subject of another post.

As always, if you have any feedback, questions, or free money you want to send me, leave a comment below, or get me on Twitter. Have fun sensing motion, and remember: This doesn’t work for vampires.